Assessing and Developing the Vert - Joint by Joint

In the VJ bible 2.0 I talk about assessing and training the vert via a joint by joint approach. In my opinion this is probably the most modern and efficient way to optimally individualize programs when training for jumps.

When performing a task such as the VJ the body will attempt to utilize the naturally more powerful and more efficient muscles over the weaker/less efficient muscles. Thus, if one muscle group of the 3 is stronger you'll tend to utilize it more when you jump. We see this a lot with guys that have overactive/dominant quadriceps. Their quads activate so much when they jump that over time they put a lot of undue stress their knees. What these folks need to do is balance out their quads by strengthening the other 2 muscles acting on the jump (hip and ankle extensors).

Body structure and things like tendon lengths will also influence muscle contribution to the jump. The basic idea is some individuals might be 60% knee, 30% hip, and 10% ankle; while others may be 60% hip, 30% knee, and 10% ankle, or any combination.

One can be ankle dominant, quad dominant, or hip dominant, or any combination. Ideally you want to be ankle and hip/glute dominant, but with plenty of quadricep power too. This approach can help you achieve that if you realy dedicate yourself to it, but it also helps to know where your weakness or dominance is so you can train to balance out your weaknesses and hone your strengths. So what are your strengths and weaknesses? Assessing ankle dominance is the simplest so we'll cover that first:

A person with ankle dominance will have good feet, they'll tend to excel in jumps requiring little knee bend and short ground contact times, and in sports will tend to play better than they test. In other words, they might not have the greatest weight room numbers, the greatest timed speed, vert, or agility, but on the field (or court) they'll tend to excel at a level exceeding their measurables. There are specific tools that can test this, such as just jump pad utilizing a 3 consecutive jump test. This measures ground contact times and jumping height over 3 consecutive jumps performed without hesitation between reps. In my experience, an individual with exceptionally powerful ankle extensors will spend less time on the ground with less of a dropoff between each consecutive jump. Here is an example of how it works:

Fortunately, you don't need a just jump pad to assess ankle dominance. You can simply look at your performance in other various feats. Someone with powerful ankle extensors will get nearly as high on a simple consecutive ankle jump drill as they do a standing vert - the jumps will be smooth with little noise and a gradual increase in height the first several reps and easy maintenance of height over extended repetitions. Here's an example:

Poor performance on these assessments (stumbling around etc) will also indicate ankle extensor weakness. If nothing jumps out at you there you probably don't have exceptionally powerful, or weak, ankles.

Now let's talk about assessing quad and hip dominance: The 2 really can't be completely separated because they work in conjunction. The basic idea is you want to boost BOTH quadricep and hip power without getting too far out of balance on the quadricep side. It's relatively easy to become overly quad dominant when training for VJ because most Vert increasing exercises (plyos, jump squats, squats) inherently hit the quads harder than the hips. This is fine, but generally speaking it's always a good idea to get as much hip contribution as possible into your jumps. Not only does this promote higher jumps, but it also promotes a smoother, crisper, movement pattern and takes stress OFF your knees - an area which is very prone to injury in athletes that do a lot of jumps. There is also research indicating athletes with superior jumps get more out of their hip extensors. 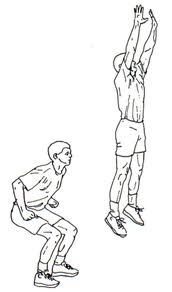 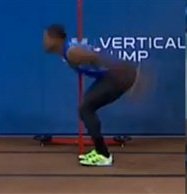 However, that assessment isn't totally accurate because people with more fast twitch muscle fibers tend to use less of a descent in their coutermovement, so will appear to move more straight up and down even WITH significant hip involvement. Thus, it's also a good idea to look at a couple of other things:

Perform several consecutive standing jumps in a rhythmic fashion. If you don't feel your glutes pump AT ALL you might have problems with quad dominance. If you perform squats after a brief layoff and don't get sore AT ALL in your glutes you might have problems. Lastly, how healthy are your knees? Does jumping irritate your knees? If so that might indicate quad dominance.

Just remember - having powerful quads is fine. Don't neglect them, particularly if you don't have a good base of general strength (1.5 to 2 times bodyweight squat), just don't them get too far out of balance with your glutes. I recommend all athletes include supplemental hip extensor work via exercises such as romanian deadlifts, hip thrusts, and reverse hyperextensions and if you have "symptoms" of overactive quads it's generally best to cut back on the volume of squatting dominant work and increase the volume of glute dominant work for a while.

How The Jumps Affect Joint Contribution

If those assessments aren't enough, you can also look at your performance on certain TYPES of jumps and get an even more accurate picture. Individual muscle/joint contribution to the jump can also change based on the style of jump. For example, a running single leg jump can be as much as 60% ankle, whereas a standing vert might be as little as 10% ankle. Thus, if your ankle extensors aren't up to par you probably won't perform well in a single leg jump.

A standing vert is about equal knee and hip, and less ankle

A running bilateral vert is roughly about equal knee, hip, and ankle

A depth jump is VERY ankle dominant, slightly more quad dominant than a standing vert, and largely takes the hip extensors OUT of the movement

You might have some of these you really excel at and others you're terrible at. But based on this principle you can kinda see which muscles in you are dominant, which muscles are weak, and train accordingly.

You can also use basic strength assessments in combination with these assessments to really hone things down. Let's say your depth jump off an 18 inch box is better than your standing countermovement jump and you squat double bodyweight. You want to increase your standing countermovement jump. Are your ankles weak? Well, if they were you probably wouldn't be performing well on the depth jumps. Are your quads weak? Well, probably not, given you squat double bodyweight. That leaves the hip extensors as the only possible weak link.

If you're quad dominant and want to increase your hip extensor contribution it's a good idea to use more hip extensor dominant exercises in your routine, such as barbell hip thrusts, dumbell swings, hang snatch, hang clean, etc.

If you want to further increase quadricep power a simple VJ routine of jump squats and regular squats will get it done.

If you seem pretty balanced then a balanced routine consisting of plyos, squats, and supplemental hip extensor work will likely be all you need. A sample routine might include a plyo movement, a squat based movement, a hip extensor dominant movement (romanian deadlift or hip thrust), and a calf raise variation.

Hopefully you found this beneficial. In the VJ bible 2.0 I go into more detail on this concept and teach you how to lay out a complete routine using these principles, based on your dominances, weaknesses, and goals.

Hopefully this gives you a bit of insight into some of the modern methods for promoting optimal vertical jump development. Good luck with it!