Q: What's the deal with squats. Lately I've been hearing a lot of people say that squats are bad for speed development yet they have helped me so much.

The quickest way for a beginner to intermediate level athlete to improve their overall lower body level explosiveness is to improve their relative strength in the squat and science is clear on this.

How strong is strong enough

The average person simply isn't able to bend their knees and apply much force and if you're weak it doesn't matter how quickly you apply force because what you're trying to do is equivalent to trying to blast a space shuttle into orbit or blast a muscle car down the track with a 5 horsepower motor.

Don't Get Cute Until You Need To

You can use all kinds of fancy gadgets, make all kinds of modifications, and spend lots of money on special fuels and the like, but you ain't gonna win any races if you're trying to race with a lawnmower engine! Therefore, the quickest way for most people to boost up their attributes is, you guessed it, increase their ability to bend their knees and apply force!

Now, once you've got your strength levels up to moderate levels, which means at least a 1.5 times bodyweight squat, you can worry about getting fancy modifying your motor to work more efficiently. But until then it's a waste of time.

Conversely, the person running drag races with a 500 horsepower motor who thinks he can improve by putting a 600 horsepower motor in his car is woefully misinformed. He'd be better off modifying how his motor functions so that he can get more out of it.

Get a Bigger Engine and You Get Faster

Now, in motocross classes, the lap times will improve linearly as one goes from 50 cc all the way to 250. The same is not true, however, when one makes the jump from the 250 class to the 500 class. In fact, the opposite is often true. The 250 class riders often turn in better lap times then the 500s. Well, since the 500 cc motor is twice is big as the 250 cc motor how is this possible? Good question. The 500 does have a bigger motor but it's also heavier and bulkier and more difficult to control. The 250 motor tends to be more efficient and runs at higher RPM so the 250 is where it's at in competitive motocross.

The same is true of strength with respect to speed development. Doubling your squat is like taking the motor on your motorcycle from 125 to 250 CC. You can expect to blow away the weaker 125 cc punks. However, taking your squat from say, 350 lbs, all the way to 600 lbs, is like going from 250 cc to 500 cc. Many of you are gonna develop a bigger motor with those additional squatting poundages but you might not be able to translate it into performance improvements. Once you hit 250 cc your ability to apply force by bending your knees should be sufficient so your time may be better spent getting more out of your motor and focusing on muscle group specific strength and speed development.

So what do I mean by muscle group specific strength and development? Here's what I mean. The function of the human body will largely follow it's form. Charlie Francis used to describe it with the phrase "what looks right flyes right." In other words, a trained eye can look at the way a person is built and tell with amazing accuracy how they will move before ever seeing them move. Occassionally you find someone like KC Chiefs offensive tackle Willie Roaf who seems to defy all logic, but for the most part, "how" a person moves can be determined by simply looking at the way they're put together and their muscular development.

OK, now the expression of speed favors a certain type of movement and that is movement that is dominated by the hip extensors, the glutes and hamstrings. In order for movement to be dominated by the hip extensors those muscle groups should be developed to an optimal form that allows the function to naturally follow. Now, the problem is that as strength is developed muscle mass is also developed and as a person begins to advance they reach a point where they can change function because of changes in their form. How the "form" responds to training depends on the individual build of a person. Some people have a lot of natural muscle cells in the posterior chain and few in the quadriceps. Some are the exact opposite.

The muscular balance and build doesn't make a whole lot of difference with respect to vertical jump development but for speed development it does. A person with overly developed quadriceps and lack of hamstring and glute development will tend to be a heel to toe runner and have trouble gliding, planting, and getting off on the balls of their feet. Top speed will suffer on account of this. Even if the posterior chain is developed, in someone that has massive quadricep development, they will still struggle with ideal movement patterns because their body will try to do things that favor the stronger muscle groups.

Scrawny Butts= No Speed + No Explosiveness

Ok, now initially squats are the ultimate cureall for lower body strength and development regardless of the individual. The biggest weakness among young athletes is lack of glute development.

Squats allow one the biggest bang for the buck when strengthening and adding size to the glutes, quadriceps, and hams all in one shot in that order and that's why they are so effective initially.

Eventually, however, as some people meet and surpasses the general strength standards, they begin to accumulate large amounts of muscle mass on the thighs and, depending on their natural structure, the development of their quadriceps can begin to overshadow the development of the hamstrings which is where the problem with squats comes into play. It is these individuals who will then need to change focus.

Here is a nice example of an athlete with massive, yet quad dominant thighs, working on his lower body balance. The first 2 pics were taken 6 months ago on the same day. The last one was after several months of more speed specific training focus. Notice how the quadriceps dwarf everything else in the first 2 pics and in the final pic everything is more even. Even at 5'10 and 215+ lbs this athlete can fly around with the best of them. 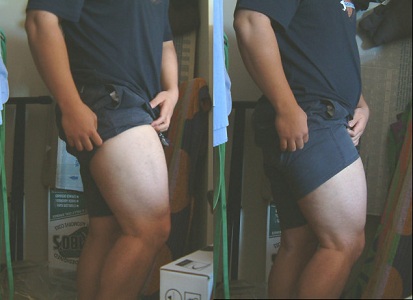 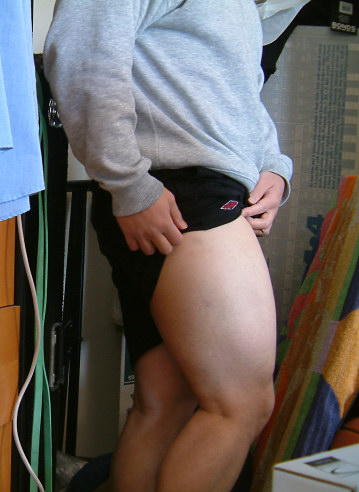 Here are some examples of posterior chain development and balance.

Now, if you're one of the people who has adequate leg development and strength in place yet needs to change your the balance how do you do that? Well, for speed development you get away from focusing on exercises where you "bend your knees" and focus on exercises where you extend your hips. So, get away from squatting and focus on extending, where the focus is high RPM strength, which I truly believe a person can never have enough of. That means everything on the backside of your body becomes more important. Deadlift variations, glute hams, reverse hypers and leg curls become your main strength movements and jumps, bounds, and sprints become more important for your development.

1. Get light on your feet (practice your sport specific skills and footwork)

3. Improve the ability to extend your hips so that what happens after you've bent your knees will improve.

That's all there is to it!