I've talked briefly in the past about the importance of moving on the balls of the feet in my 3 quick tips article and Good Feet/Bad Feet article, but in this article I'll go into more detail.

For years coaches in a multitude of sports have belabored the key, "Stay on your toes!" Although literally being on your toes is a bit of an exaggeration and is likely to lead to a trucked toe, staying on your toes really means you drive off the balls of your feet and less on your heels. Watch many great athletes when they accelerate or sprint and their heels barely seem to hit the ground. This is without any conscious input on their part.

Most people are rearfoot dominant, which means they carry too much weight on their heels when they walk, run, or move in general. Moving more towards the mid and forefoot favors quicker, more efficient, less stressful movement, and also makes it easier to activate the powerful hip extensors, which have the capacity to really make you fly.

If you want to be a good athlete you need to get off your rearfoot and onto your mid & forefoot. How do you do that?

Well, unfortunately you’re unlikely to find much in the way of relevant scientific or laymen’s information specifically delving a great deal into this topic. That doesn’t change the fact that there are no shortage of gimmicks out there that promise this. There are even products like jumpsoles out there designed to make you move on the balls of your feet. The problem is the verbal cues and training aids are relatively worthless because most people don't have the inherent muscular recruitment patterns and strength to move in this posture naturally. If you have to think about it or force yourself to move a certain way it's generally not gonna be very effective. The key is optimizing your muscle development and movement patterns so your body inherently takes an "on the balls of the feet" posture without you having to voluntarily force yourself to get in that position. When that happens it'll feel natural and efficient. Here are a few keys:


One simple thing you can do is spend a little bit of time each week training barefoot. Your body won't let you move rearfoot dominant when you're barefoot because it'll hurt too much. As an experiment try taking your shoes off and lightly jog a few steps down the street. The ONLY way you can do it is to get up on your forefoot. Also pay attention to which muscles you "feel" the movement driven by when you run barefoot. Don't train on concrete, but if you have access to a fairly soft surface (grass is ideal and most carpet works fine), don't hesitate to scrap the shoes for a while. Here is a video that clearly shows the difference between running with shoes on and off.

The idea is to do enough barefoot training that your feet begin to favor the barefoot posture, even when wearing shoes. Even 20 minutes once a week on grass is helpful. If barefoot training isn't an option you can always train in lighter footwear that helps mimick barefoot running. Shoes like Nike Free 5.0 or 7.0 and Vibram 5 fingers can be an option here, although you better have a healthy self-esteem if you're gonna walk around wearing Vibrams. 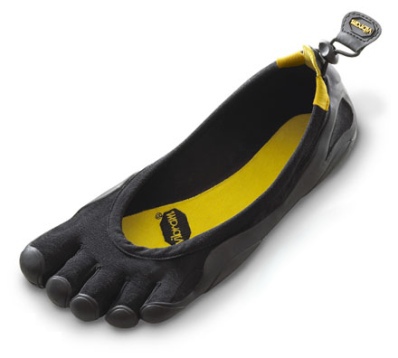 Here are some additional tips:


When your hip extensors are strong they tend to "want" to drive your movements a bit more than someone who's glute deficient.

Now that you have a good glute pump take a casual stroll and see if you notice any differences in how you're walking. Most likely you'll notice you tend to rise up on the balls of your feet a bit more when you walk. That's one of the importances of a strong posterior chain.

Key #3: Strengthen the psoas in the end range

The psoas works in concert with the glutes to control the femur from the hip end rather than the knee end, which also favors forefoot dominance. 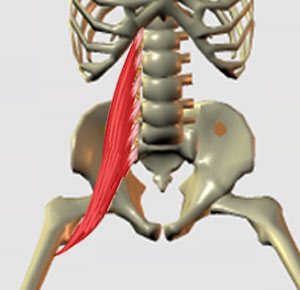 Everyone has heard coaches yell, "High knees, high knees!!". Some athletes inherently run with high knees while others barely lift their feet an inch off the ground. Those who don't do it naturally aren't really helped much by the cue. The psoas is the muscle responsible for raising your knee up to 90 degrees and above from a standing position. One key is being strong in 90 degrees plus of hip flexion, which leads to optimal femur control, or put simply: It ensures the muscles high on your hip are controlling your thigh bone. When the psoas is weaker than the rectus femoris and tensor fascia latae you will tend to favor those muscles and will likely have a more difficult time getting proper knee lift when you run, and also, due to the influence on the posture of your hips, also favor rearfoot dominant movement. The key is strengthening the muscle that efficiently lifts your knees up to 90 degrees or higher.

Leg lift variations performed above 90 degrees have the advantage of torching the lower abs. 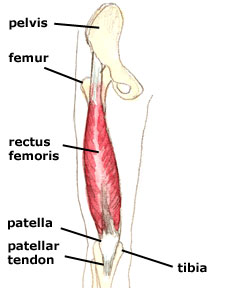 Stretching the quads and rectus femoris turns off what are often tight and overactive muscles controlling the knee and that promotes better hip dominant movement. Anyone that has considerably increased the muscular development of their thighs will have a tendency to lean towards having tight quads. That's not to say that muscular development of the thighs is a bad thing by any means, just pay attention to flexibility.

Additionally, it is important for the psoas to be strong, as I talked about earlier, but you don't want it to become tight or it will negatively impact gluteal recruitment. If you noticed the earlier pic of the psoas you can see that the majority of the muscle lies up above your hip joints in more of the deep abdominal region. I’ve noticed many people are tight and often have adhesions in the upper psoas, often confusing it as an ab or oblique issue. The upper psoas is hard to get to and in my experience requires a solid twist of the upper body to reach effectively. When it’s dealt with effectively it’s not uncommon to hear an audible “pop” in your lower ab region as the adhesions release, followed by an immediate ease in breathing and increased feeling of looseness in the hips. Here is a good all in one stretch I recommend for the quads, rectus femoris, and the psoas:

Most people should stretch daily and the more extensive your flexibility impairment the more frequently you should do so. I've had some people do that stretch for 20 seconds every hour of the day, others can get away with one stretch every other day. Many people can do nothing but implement proper mobility for these muscles and begin moving better almost immediately.


Now that we've covered the issues and solutions, here is a simple routine built towards correcting the primary issues:

It should be apparent that forefoot movement inherently largely goes hand in hand with optimal hip extension patterns, which was covered in detail in the No glutes = No Results article I posted previously.

That leaves us with one more key:

Key #5: Incorporate your newfound movement efficiency into actual progressive movement patterns and optimally strengthen and develop all of your prime movers


This requires a mmore extensive training prescription, but you'll find enough no-nonsense programming to last you a several years in either the No Bull Speed Development Manual, or Vertical Jump bible 2.0. You'll also find plenty of additional information on optimizing various aspects of athletic ability.

Put all those things together and you should be a totally different athlete. Good luck!

Thought I would share a very impressive testimonial I received from an athlete who put the info. in this article to good use:

"Track and Field was my main sport last year, but I took the last six months off. In that time, my only athletic development was the fact that I started wearing and working out in Vibram Five fingers. No significant strength gains. no high-intensity plyometrics. Not even any weight loss. I ran my first 100 meter dash of the year last week, and ran a PR by 5 tenths of a second. I went from and 11.5 to an 11.0 sprinter purely by improving my foot function."

Although those certainly aren't typical results they do show the possibilities.